Tonight
Patchy fog after 5am. Otherwise, cloudy, with a low around 33. Southeast wind 6 to 8 mph.
Washington's Birthday
A chance of rain, mainly before 3pm. Areas of fog between 9am and 1pm. Otherwise, cloudy, with a high near 44. Southeast wind 6 to 9 mph becoming west in the afternoon. Chance of precipitation is 30%.
Monday Night
Cloudy, with a low around 24. North northwest wind 9 to 15 mph, with gusts as high as 21 mph.
Weather forecast provided by weather.gov.
Search

Factory for a Day! 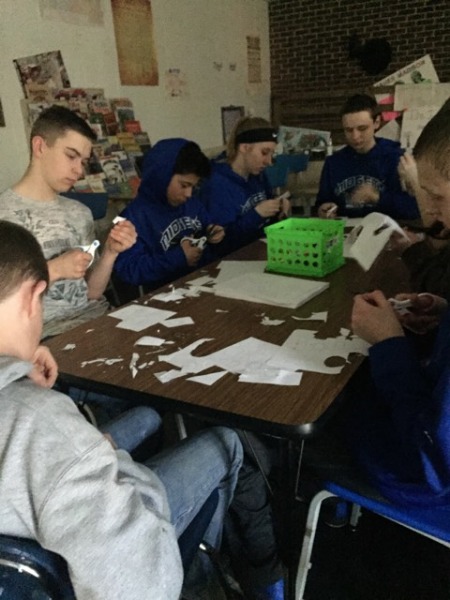 In 8th-grade Social Studies, we have been talking about the lead up to the Civil War as our year begins to wind down. Included in this chapter is the Industrial Revolution. This period has always been one of my favorites because it is so fascinating and I get to do my favorite simulation with the kids. In order to help them connect to what factory workers dealt with every day, I turned my classroom into a small scale factory for a day. There were two tables that sat nine students each, one table was responsible for cutting out shapes and the other was responsible for coloring shapes. The lights were off meaning students only had the light of the windows to work by, just like factory workers of the time. Each student received some pennies as their "pay". Boys got 7 pennies and girls got 4. If I felt they messed up, got off task, talked, worked too slowly, or just did not work according to my high standard I would take a penny. If they lost all of their pennies, they would be "fired'. Being fired meant they had to go work on a questionnaire over the activity. No one was fired before they had been working for at least 15 minutes. The kids loved this activity and were actively involved the entire time. They would want to defend themselves if they lost a penny which usually resulted in another lost penny and got very upset over getting fired. The activity lasted for a total of 30 minutes but that was enough time for them to understand how monotonous the work in factories could be doing the same thing all day long.