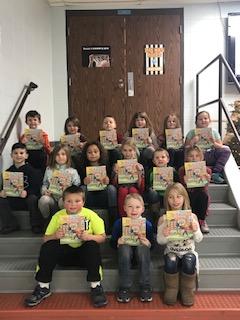 Four local businesses have generously purchased a hardback book for all students in 1st grade again this year.  The local businesses are Apple Seeds, Dun-Lap Manufacturing, Hy-Vee and Farmers Bank of Northern Missouri.  The students were very excited and appreciated the generous gift and want to say "thank-you" to each of these businesses.  The students have written thank-you cards to send in the mail.  We live in a very giving community and it is a true blessing.