Today
Sunny, with a high near 58. East wind 5 to 10 mph becoming north in the morning. Winds could gust as high as 21 mph.
Tonight
Mostly clear, with a low around 32. North wind 8 to 11 mph, with gusts as high as 21 mph.
Saturday
Sunny, with a high near 46. North northeast wind around 9 mph becoming east in the afternoon.
Weather forecast provided by weather.gov.
Search 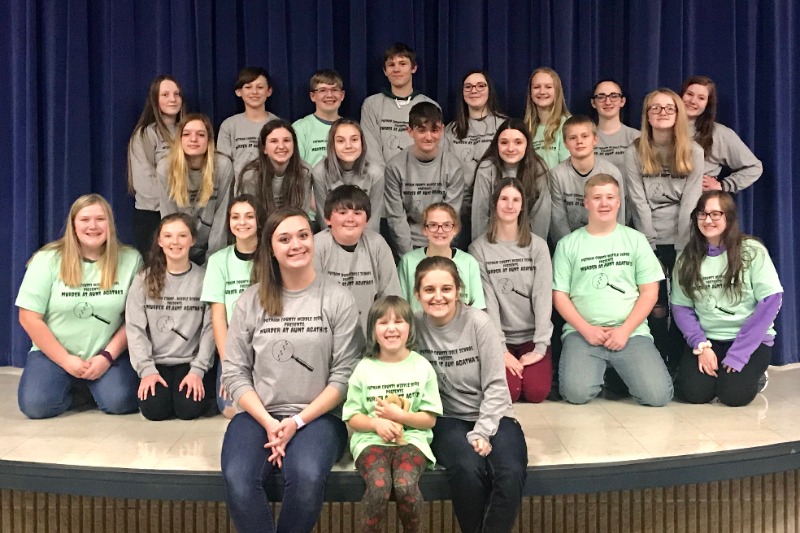 This comedy murder mystery doesn’t take itself too seriously, even as dearly departed Aunt Agatha’s nieces and nephews have gathered at her mansion to hear the reading of her will.

The relatives are a varied lot — the formerly rich VanVleets, the nerdy Earls, the hillbilly McSwines, a B-movie starlet, and sweet Rose Bloom from the other side of the family. Also present are two cons pretending to be twin sister housemaids, even though one has a French accent and the other a German one. (We should mention that one is also clearly a guy.)

As the lawyer begins, there’s more greed than grief permeating the room, which perhaps is why Aunt Agatha stipulated that anyone wanting a share of her money must first survive the night in her house. Too bad she forgot to mention there would be ghosts! Singing, dancing ghosts, in fact! But as one family member after another is murdered throughout the night, this almost begins to feel more like an Agatha Christie mystery! Luckily, Detective Sam Club arrives to help find the killer, and he certainly doesn’t believe in ghosts.

We are just one short week away from these middle schoolers performing "Murder At Aunt Agatha's". These kids have worked extremely hard perfecting their play for everyone to see. This is the hardest play the middle school has taken on and they have done a tremendous job making it their own.

I encourage everyone to come out on Friday the 6th at 6 PM or Saturday the 7th at 3 PM, the cost to attend is $4.

Friday night DECA is sponsoring a dinner starting at 4:30 PM the dinner is $7 a plate for adults and $4 a plate for anyone 10 and under. Dinner will consist of; pork loin, cheesy potatoes, green beans, dinner roll, side salad, dessert, and a drink.

We look forward to seeing everyone in one short week, you won't regret watching this hilarious murder mystery.