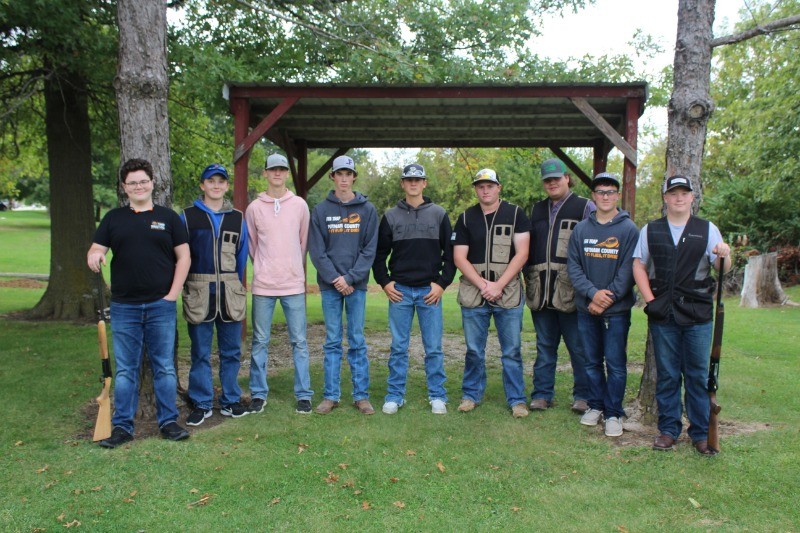 The Putnam County FFA Trapshooting team has been competing in various trapshooting tournaments. This year’s team was selected with several interested members each shooting 4 rounds for a score at the local range. After this was done, the scores were added up and the top 14 shooters were ranked. Those members trying out for the team were: A Team-Gage P, Lane N, Garret M, Lance F, and Carter Q.  B Team: Aaron S, Grace S, Cole R, David R, Dayton D, Jude P, Wyatt H, Owen R, and Jonathan F.

In preparing for the area trap shoot, members of the Putnam County squad competed in the Schuyler County FFA trap shoot at Bosco’s Gun Club in Lancaster, on Saturday, September 5th, 2020. The A team shot 228 out of 250 and placed 5th out of 40 teams. The B team shot 177 out of 250. The top score for the Putnam squad was Garrett M, with a 47 out of 50. Other scores were Aaron S with a 46, and Lane N, Lance F, and Carter Q with scores of 45.

On September 19th the team members traveled to the Milan/Green City FFA Trap shoot which was held at Bosco’s Gun Club in Lancaster. At this tournament, the A team shot a 226 out of 250 and placed 3rd out of 34 teams. The B team shot a 177 and placed 27th. The top shooters for A team were Gage P with a 48, and Lance F with a 46. The top score for the B team was Aaron S with a 40.

On Tuesday, September 29th, 10 shooters for the Putnam County team shot in the annual Area FFA Trap shoot held at Bosco Gun Club in Lancaster. The top five scores for Putnam County counted for our team score which totaled 221 out of 250. The score placed the team 7th out of 21 teams and qualified the Putnam team for the district shoot. Lance F was top shooter for Putnam with a 46 out of 50. Other top scores for the Putnam team at the area shoot were:  Carter Q with a 45, and Lane N and Garrett M, both with a score of 44. The District trap shoot was held on October 3rd at the West Quincy Gun Club. The members who were able to attend the district trap shoot are Lane N, Carter Q, Lance F, David R, and Garrett M.