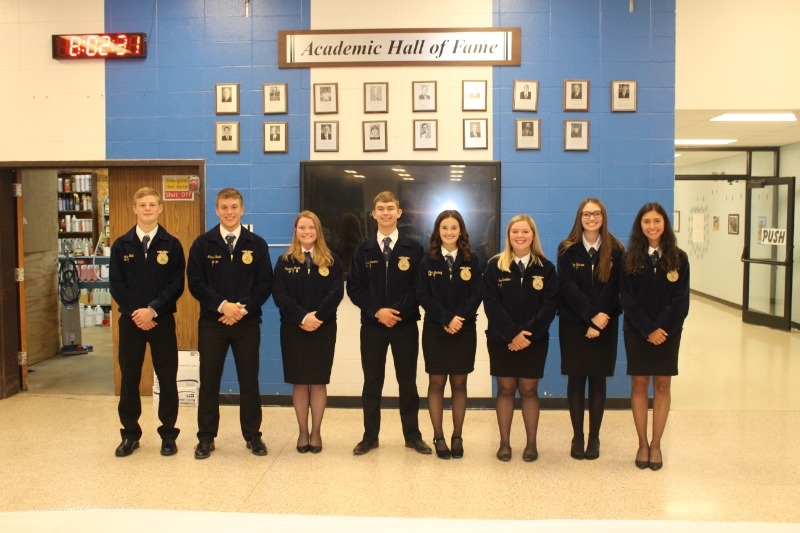 The 2020-21 FFA officer team conducted the annual FFA Awards Banquet on May 5th, 2021. Contest teams, proficiency award winners, and other individuals were recognized for accomplishments throughout the year. Approximately 140 members and guests attended this year's banquet. After the meal, the awards presentation was started and those results are as follows:

This year, 2 students completed Proficiency Awards in 2 areas, all were first-place winners on the chapter level. These members were Vanessa Bondy (Vegetable Production, 3rd place in Area) and Justin Webb (Sheep Production, 1st place in Area and advanced to state-level competition).

The Outstanding Achievement Award is given to those who exhibit outstanding commitment to leadership and participation in the chapter’s activities. Members winning this award were Freshman: Johnathan Foster. Sophomores: Adeline Dickerson, Kalyn Hinkle, and Alexia Mayberry. Junior: Sofia Valencia. Seniors: Grant Mathes and Cole Robinson.

Emily Davis received the DeKalb Leadership Award which is given to the graduating senior who has been very successful in his or her agricultural program during their high school career. This award is based on scholastic achievement, leadership, and SAE.

The Star Greenhand award is given to the most active first-year member that has a strong SAE program and who has demonstrated strong leadership and chapter participation. This year’s Star Greenhand was Dylan Hamilton.