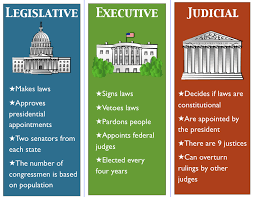 In December, the 8th grade Social Studies students were focused on the powers of the 3 branches of our government. After that lesson, we played the Branches of Power game on iCivics, which was a hit with the kids. This game helped them to understand the process of passing laws through our system of government. Then right before winter break, we played a more active game. I placed 3 signs around the room, each with a branch of the government printed on it. The students were divided into 3 groups and were given a stack of powers our federal government has. They then had to relay race to put the powers under the correct branch of government. If they got even one wrong, they had to take all their cards down and start over. These eighth graders are highly competitive so they got really into it! After the game was over, I had them take a citizenship test to see if they could become a citizen if they weren't lucky enough to be born in our country. They all enjoyed a good laugh over their results!

We also finished our unit on the beginning of our country. The students have spent a good amount of time reviewing important government concepts which will give them a solid base to work with when they get to Government class in high school.